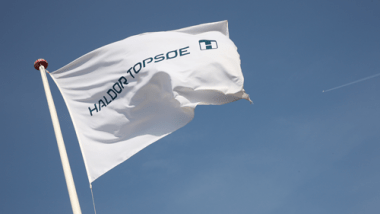 A satisfactory 18% increase in catalyst revenue was not sufficient to counterbalance a significant decrease in technology revenue of 30%. Overall market share was maintained and the ambition for the future is still to keep growing faster than the market. However, the general market slowdown due to continued recession in emerging markets along with geopolitical unrest results in a revision of the company’s strategy and subsequent capacity adjustments. Recent years’ growth has led to a present overcapacity of staff, and layoffs mainly in Denmark have proven inevitable.

Haldor Topsoe A/S was negatively impacted by a slowdown in realization of technology projects due to a downward trend on the global market for larger technology projects e.g. influenced by geopolitical unrest in some of the areas where the company operates and an economic slowdown in China and certain other BRIC countries. Generally the recent market developments have in some areas been disappointing compared to the company’s expectations and capacity planning.

“For Haldor Topsoe A/S it is of great importance that we have succeeded in maintaining our strong position and market share in our catalyst business. Having said that, we, like the industry in general, have been affected by the geopolitical unrest in some of the areas where we do business. Moreover, we had not expected continued declining growth in emerging markets which has hit us hard in our technology business”, says Bjerne S. Clausen, CEO in Haldor Topsoe A/S.

“It is in the light of these challenges that we have found it necessary to adapt to the current market conditions and downsize the organization. Unfortunately, this means that we will have to say goodbye to some of our colleagues, meaning that around 160 employees, the vast majority in Denmark, will be leaving us,” says Bjerne S. Clausen, and continues:

“Despite the current challenges, we remain confident about the future. Not least because we continue to see a strong interest in the solutions that we offer to meet the increasingly important global challenges in relation to energy, climate, the environment and food supply. We have therefore revised our corporate strategy in order to reflect the present market conditions – i.e. many fundamentals remain the same, and we stick to our innovation strategy as well as our growth ambition of developing faster than the market”, Bjerne S. Clausen concludes.

The half year figures have not been reviewed by the company’s auditors. The audited Annual Report for 2015 will be published by Haldor Topsoe A/S on 31 March, 2016.

Increased profitability in first half of 2016

Market share maintained in a difficult first half year for Haldor Topsoe A/S A satisfactory 18% increase in catalyst revenue was not sufficient to counterbalance a...
8 min read

Financial report for the first half of 2014

The results of the first half of 2014 for Haldor Topsoe A/S did not meet our growth expectations.Revenue decreased compared to first half of 2013 primarily due to postponed...
7 min read
View All Posts