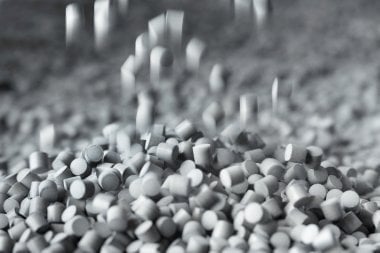 Today, Topsoe introduced SK-501 FlexTM – a groundbreaking high temperature shift (HTS) catalyst with the unique ability to operate at any steam-to-carbon ratio, allowing producers to achieve record plant efficiency in ammonia, hydrogen and syngas production. The announcement was made at the Nitrogen + Syngas conference in Berlin.

“Producers get unique flexibility with SK-501 FlexTM because it takes away the minimum steam-to-carbon requirement imposed by conventional HTS catalysts. Without changing production setup, the producer can freely choose to keep production at its current level, but save on feedstock and energy costs – or boost production by up to 5%. No matter what he chooses, he will see great growth in profitability with SK-501 FlexTM. For a large-scale ammonia plant, the improvement in revenue is approximately 11 million dollars per year or 57 million US dollars over a typical catalyst lifetime,” says Johan Jönsson, Product Manager in Topsoe.

The exceptional activity and stability of SK-501 FlexTM has been demonstrated through several years of industrial operation and significantly exceeds the results with conventional iron-based catalysts. The SK-501 FlexTM formulation is based on zinc oxide and zinc aluminum spinel that has been known to catalyze the water gas shift reaction, but Topsoe researchers are the first to transform this insight into commercial benefits for producers of ammonia, hydrogen and syngas.

The iron-free formulation of SK-501 FlexTM prevents formation of unwanted iron carbides that reduce the catalyst strength of conventional iron-based HTS catalysts. Another major advantage of the new formulation is the complete absence of chromium, most notably the hazardous hexavalent chromium found in all iron-based HTS catalysts. This eliminates a serious risk to plant personnel safety and the environment and secures full compliance with the EU’s REACH regulation.

Without chromium and its associated risks, there is no need for extra procedures at start-up. In addition, activation is fast and typically takes place in connection with the start-up of the reforming section, so costly downtime is reduced significantly.