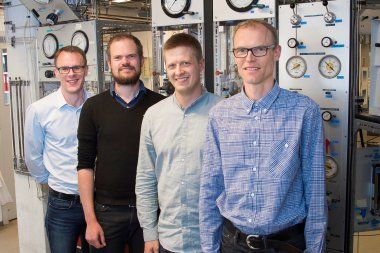 The article published in today’s issue of the internationally leading scientific journal Science is promising news for the methanol industry and everybody else. For the first time, researchers from Haldor Topsoe R&D and Technical University of Denmark, Department of Physics, show how optimized use of zinc oxide can make industrial methanol catalysts produce significantly more methanol without consuming more energy. This means that the world’s growing demand for methanol can be produced using fewer resources and raw materials in the near future.

“The news is that we have shown how to optimally control the well-known promoter zinc oxide. To understand in detail how zinc oxide boosts the effect of the copper-based methanol catalyst was a challenging task because the catalyst is extremely dynamic and the process takes place at nanoscale and at high temperatures. But we combined a variety of methods in our experiments to show how the size and placement of the zinc oxide nanoparticles on the surface of the catalyst has a significant influence on how efficiently the catalyst produces methanol,” says Jens Sehested, Senior Scientist, Haldor Topsoe R&D.

Topsoe is a significant player in the global methanol market and offers integrated solutions for the production of methanol, including project development, process technologies, proprietary equipment, catalysts and technical services.  The company designs plants that produce up to 5,000 metric tons of methanol per day and its solutions extend to the further processing of methanol into products such as formaldehyde, DME (dimethyl ether), and TIGAS™ (synthetic  gasoline).

Methanol is consumed at the scale of more than 65 million tons per year and is being considered as a future energy carrier. It is used in the production of formaldehyde for plastics, plywood, and paints, propylene for plastics, acetic acid, as well as transportation fuels, where methanol is blended in gasoline or used in the production of biodiesel and DME. Other uses include solvent, antifreeze, denaturant for ethanol, and aerosol spray propellant. The many uses of methanol and its potential to replace fossil fuels in many areas have even led to the notion of a future methanol-based economy (introduced by Nobel Prize winner George A. Olah) built on a sustainable production of methanol. Methanol can be produced from a variety of fossil resources or biomass.

More information, including a copy of the paper, can be found online at the Science press package webpage at http://www.eurekalert.org/jrnls/sci. You will need your user ID and password to access this information.

Copies of the Science paper may be distributed only by the AAAS Office of Public Programs, to working journalists. Kindly contact them on +1-202-326-6440 or scipak@aaas.org.