Chairman of the Board Henrik Topsøe resigns due to illness 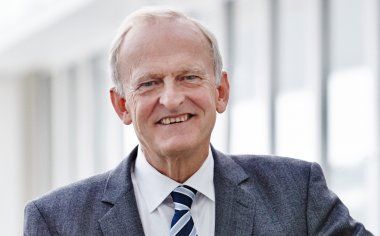 Having been ill with serious cancer for some time, Henrik Topsøe has decided to resign as Chairman of the Board of Haldor Topsoe A/S as of today. On the recommendation of the Board as well as the parent company Haldor Topsoe Holding A/S, Jeppe Christiansen has been elected new Chairman.

“Even though I regret leaving the exciting work in the Board, I am also delighted to be able to hand over a well-managed company to my successor. We are all very happy that Jeppe Christiansen has accepted the task as Chairman of the Board. He is not only inspiring to work with; he has a deep-rooted knowledge of the company and has done an excellent job,” says Henrik Topsøe.

The new Chairman looks forward to heading the development and expansion of the company:

“I have made no secret of the fact that to me the company Haldor Topsoe is somewhat of a national treasure. It is an honor that the owners has entrusted me with the position as Chairman. I will strive to ensure that our decisions will always serve the company, customers and employees in the best possible way,” says Jeppe Christiansen and continues:

“I have really valued my collaboration with Henrik Topsøe. He is a modest man but is very highly respected both as an internationally acclaimed research scientist and among the company’s customers and employees. His personal drive and unceasing commitment through 42 years have led to many and important results. Therefore, I am pleased that Henrik has accepted to remain in our Innovation Committee so we can continue to benefit from his unique insight into research and development. He will also keep on developing and nurturing customer relations internationally.”

The position as Vice Chairman after Jeppe Christiansen is filled by Jakob Haldor Topsøe who represents the family ownership in the Board of Haldor Topsoe A/S and the parent company Haldor Topsoe Holding A/S. He is also very pleased with the appointment of the new Chairman:

“It has always been inspiring to work with both Jeppe Christiansen and Jørgen Huno Rasmussen. I look forward to beginning the work in the Chairmanship with them.”

About Henrik Topsøe’s contribution to the Group, Jakob Topsøe says: “Henrik’s monumental importance for the Group is probably not known to many outsiders; and his importance will continue. Even during the course of his disease, he has demonstrated almost unreal energy and determination. It has made a huge impression on everybody who knows him, and we are very pleased that Henrik will continue his work outside the boardroom.”

In his time as Chairman, Henrik Topsøe has headed the effort to expand and strengthen the competences of the company’s Board so that it today comprises strong scientific, engineering and business profiles on top management level.

“I am very proud to have headed – together with the rest of the Chairmanship – the professionalization that we have carried out in the Board over the last years. Not only has it brought us new inspiration and fresh perspectives – it has also led to what I will not hesitate to call a highly competent and well-functioning board. In this connection, it has been very valuable that Jakob Haldor Topsøe and Christina Topsøe, who both represent the owners also in the Board of the holding company, have played a very active role,” says Henrik Topsøe.

1986 – Member of the company’s top management

2013 – Elected Foreign Associate of the National Academy of Engineering (US)

2013 – After the death of his father, Chairman of the Board

Henrik Topsøe has been member of the boards of a number of international scientific organizations.

1986 – Economist at the bank Sparekassen SDS