We need to talk about sulfur pollution – and SNOX™

You often get a variety of answers when you ask people what they know about sulfurous emissions or their current impact on the environment. Put simply, greater effort is being made around the world to combat sulfurous air pollution, but the most common methods of flue-gas desulfurization aren’t necessarily the best option when it comes to protecting the planet or humanity – and they don’t make a lot of sense from a commercial perspective, either.

In the case of Wet Flue-Gas Desulfurization (“WetFGD”), which is meant to remove sulfurous emissions produced by industrial sites, the process consumes a tremendous amount of limestone and water, and produces large quantities of gypsum as a waste product. Only a portion of this sulfur-rich gypsum (more accurately referred to as “sulfur-contaminated gypsum”) can be utilized by nearby cement-production or road-construction operations; the majority ends up in a landfill, or accumulates in an open-air gypsum mountain. These storage methods can produce toxic runoff that poses a threat to both surface and underground water sources, and they also release significant quantities of sulfurous, potentially hazardous gypsum dust. It’s also worth noting that the chemical reaction that occurs when WetFGD limestone and sulfur dioxide (SO2) come into contact results in the release of airborne CO2. “Rerouting” air pollution into another form of pollution is a risky workaround, to say the least.

Sulfur-contaminated gypsum isn’t great business, either. It’s not readily useful, aside from the aforementioned outdoor applications (indoor applications, which used the gypsum as a primary ingredient in drywall, ended with homeowners evacuating their own houses to avoid inhaling toxic fumes – and taking the producers to court for tremendous compensation), and thus a WetFGD gypsum byproduct, more often than not, represents money thrown away in a very literal sense.

Luckily, a cheaper, more sustainable, and equally effective flue-gas desulfurization technology has existed for decades: Topsoe SNOX, which is the most effective sulfur-removal solution short of snapping your fingers and converting sulfur directly into gold.

With SNOX, SOx, NOx, particulates, and mercury are all removed from an operation’s flue gas by a process that doesn’t consume water or absorbents, and doesn’t produce waste or waste water. In addition, since SNOX is an energy-efficient, exothermal catalytic process, it also generates valuable steam that can be used to provide CO2-free clean energy. Last but not least, the removal and capture of harmful air emissions yields high-quality, commercial-grade sulfuric acid, which is currently the world’s second-largest consumable commodity; market prices have increased by double- or triple-digit percentages over the last two years. As previously mentioned, SNOX has been available for decades, but renewed focus on OPEX, sustainability, and environmental impact have resulted in higher popularity and increasing utilization. 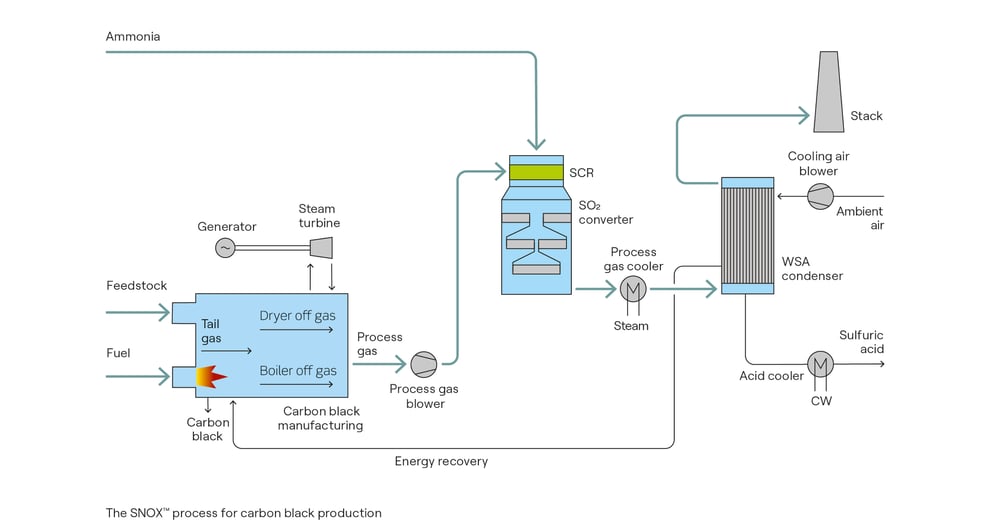 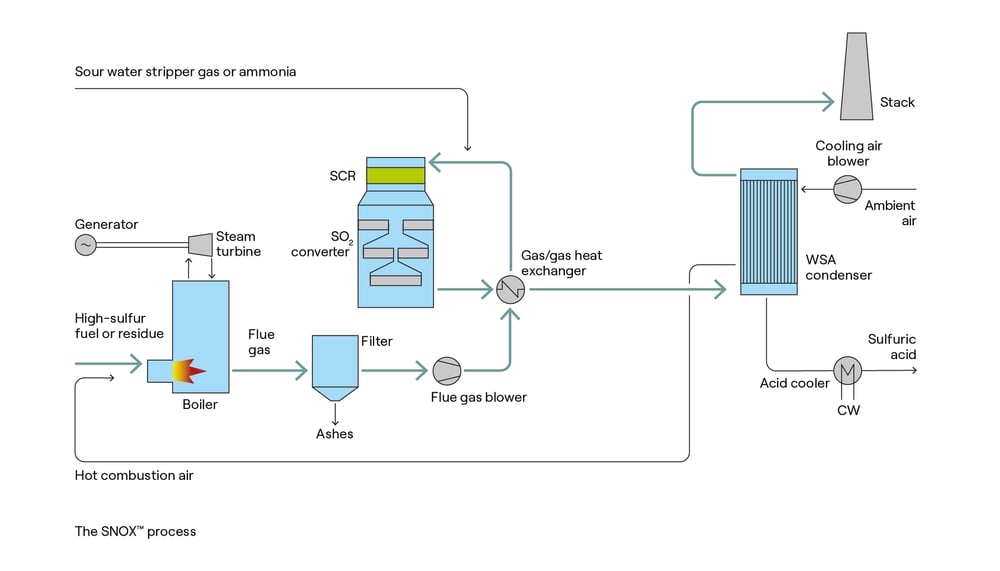 SNOX is primarily used after three different upstream flue-gas applications: power plants (stand-alone or within refinery boundaries), calciners, and carbon-black manufacturing. The first SNOX plant entered operation in 1991, in Ohio, USA, at Ohio Edison. In that same year, another SNOX plant went into operation in Aalborg, Denmark, at Vattenfall, attached to a coal-driven power plant. In 1999, having gained many years of operational experience, Topsoe implemented a SNOX solution within a refinery application in Gela, Italy, at Agip/ENi, removing SOx, NOx, and particulate matter from a power plant burning pet coke – a by-product from the refinery – to deliver valuable sulfuric acid and CO2-free clean energy. Topsoe subsequently sold SNOX solutions to other well-known companies, including OMV in Schwechat, Austria; Petrobras in Pernambuco, Brazil; and Thai Oil in Sriracha, Thailand. Most recently, three US carbon-black manufacturing sites have added sustainable Topsoe flue gas-cleaning technology to their installations, taking advantage of the clean exhaust air in conjunction with the significant environmental and financial benefits.

The results for every SNOX setup were, and will remain, the same: ton after ton of sulfuric acid, ready for use in any relevant industry, instead of kilometer-length gypsum mountains and acidified oceans containing more sulfur than plankton. With so much proven repeatability, we can confidently state that from a cost-centric perspective, a full SNOX implementation amounts to a smarter investment than more ubiquitous desulfurization methods. Moreover, it begins paying for itself in sulfuric-acid volume almost immediately - unlike WetFGD technologies, which typically leech revenue, through annual running costs, to the tune of millions or tens of millions of Euros.

There’s still time for producers to make good on their promise to the world that supports their business. Meaningful steps should, and can, be taken to minimize the threat that sulfurous emissions pose – while simultaneously maximizing the benefit they can actually offer. But with the world’s power and carbon-black demands rising, those steps must be taken soon if we’re to keep the sky and oceans at their bluest. To the producers of the world who are eager to join the sustainable clean-air movement, we extend a hand and offer the most enthusiastic invitation possible.